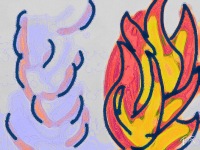 The Israelites had been freed from slavery in Egypt by God through his servant Moses. They left slavery and Egypt behind and were led by Moses into the wilderness. God guided them by a pillar of cloud during the day and a pillar of fire at night. The cloud and fire showed the people that God cared for them and was with them.

They were a people who were used to living in cities, not wandering in wilderness and it was hard. At times, they were hungry and thirsty. The people began to grumble.
God sent them food and fresh water. God sent them flocks of birds that flew so low the people were able to catch them out of the air. God sent them a strange substance that covered the ground each morning. It was sweet and good to eat and could be baked into a lovely, fragrant bread. The people did not know what the substance was so they called it manna which means ‘What is it?’

Eventually the people reached a holy mountain, Sinai. Thunder and lightening covered the mountain and the people were afraid to go near and so Moses went up the mountain on their behalf. There, God was waiting for him. God spoke to Moses and gave him laws for the people to help them live peaceful and God filled lives. These laws hold the same promise for us today. Margaret Cooling in Bible Storybags summed up these laws quite nicely:

God made an agreement with the Israelites that if they would worship only God and keep the laws then he would be their God, love them, care for them, guide them. God kept his promise, but the people were not good at keeping the agreement to honour only God and to keep the laws. Fortunately God did not give up on them.

God continued to guide them with the pillar of cloud and the pillar of fire. God continued to care for them by providing food and water. As time went on, the people again grumbled and continued to not trust God and to question Moses and the leaders provided by God. God knew they were not ready to settle in the fertile and abundant land that God had waiting for them. God knew they needed to be in the wilderness so they could learn to trust and love God and recognize that the laws God had given them were life giving. The people wandered forty years in the wilderness, led by Moses, his brother Aaron and his sister Miriam, until they were ready to cross over the Jordan River into the ‘land of milk and honey.’

God continues to love each person that God has created. God continues to give us words to live by. God continues to call us to be in relationship with God and each other so that we may live lives of abundance of peace. I invite you to ask yourself, what do I choose the wilderness or the land of milk and honey?

Messy Church is tonight, Wednesday March, 11 at 5pm in the church hall.

For the well-being of all in our community, and due to COVID-19 all our Worship Services and Gatherings have been SUSPENDED until further notice. Online prayers and a message are available each week. Check here or our social media accounts to watch.