In our scripture passage we read this past Sunday we were given two examples of people praying. The first is a Pharisee who is a respected leader of the people who follow the rules of the old covenant. The second is a the tax collector, who works at, what was commonly considered a corrupt occupation, collecting taxes for the Roman Empire.

The two prayers are also very different. The Pharisee’s prayer is grand and full of self praise. He prays, “God, I thank you that I am not like other people:thieves, rogues, adulterers, or even like this tax collector. I fast twice a week; I give a tenth of all my income.” The Pharisee thinks very highly of himself and looks down on others. He says, “look at me, look at me! I thank, I am, I fast, I give”. He says full of pride, I am better than all these people, especial this guy praying next me. What a loser! The tax collector prayer is very different he says, “God, be merciful to me, a sinner!” His prayer is simple and honest. The tax collector is honest and humble about him self. He is not worrying about how he looks to others, but knows that it is God who is ultimately in charge. There are no “I” statements, and he only refers to himself to be honest that he is a sinner, a person in need of God’s mercy.

From a place of privilege, people can too easily lose their perspective.

Lets focus for a moment on the Pharisee. From a place of privilege, people can too easily lose their perspective. The same can be said of us today. It is too easy to get caught up in the power struggles and economic ladder climbing because of the overpowering influence of profit and consumerism of our society. There were a couple of stories in the news this week that seem to be a good example of this:

I am not pointing a finger at any of the people involved in these stories (that would be a little like the Pharisee!), but I simply want to acknowledge that the weakness of our human nature still gets us into trouble today. We can too easily think ourselves above others or think that we are following the rules, and possibly lose perspective on our words and actions. An important part of being Christian and following Jesus is learning to be humble. And not just acting at being humble, but acknowledging our place in relationship with God and with our neighbours. Remembering that we are called to love God and love our neighbours as we love ourselves.

In our scripture passage from Luke, Jesus is speaking against self deluded thinking of the Pharisee. The Pharisee has so lost his perspective that he believes fully what he is praying. He is playing by the rules of the society and culture he lives in and so without further thought justifies himself and holds up himself as a true and loyal follower of God’s laws. Yet even in his certainty, Jesus judges him as falling short.

In our lives. we need to caution ourselves in our own conclusions about ourselves. When we think with confidence that we, ourselves, are a good people “who do nothing wrong” and are “hurting nobody”, then we should become most concerned. The Pharisee was completely convinced he was living a righteous life in God’s eyes.

Our world is broken by power, profit, and greed and yet its message is sounds sweet and seductive.

It is not too hard to fool others, or to convince them with word and arguments, or play on their fears and worries. Or to be fooled by them.  Jesus says to the disciples in Matthew 10:16, “See, I am sending you out like sheep into the midst of wolves; so be wise as serpents and innocent as doves” Our world is broken by power, profit, and greed and yet its message is sounds sweet and seductive. Jesus call us to be critical of what we are told and what we are shown by the world, and even what we believe about the world.

The prayer of the tax collect is so powerful because it is so open to to the work of God, God’s grace, to enter in to his life. Jesus’ trust was fully in God, and as demonstrated in his prayer, so was the tax collectors. It was simple,honest and indeed, humble, “God, be merciful to me, a sinner!”

On a Sunday at church, we say a lot of prayers. We pray to God to help us to be worshipful, we pray for God’s blessing, we pray for needs of others, we pray for forgiveness, we pray for strength and guidance to follow Christ in our lives. And although it might make for a very short service, all those prayers could be summed up in the simple prayer of the tax collector, “God, be merciful to me, a sinner!”

Perhaps, it could be our daily prayer this week. 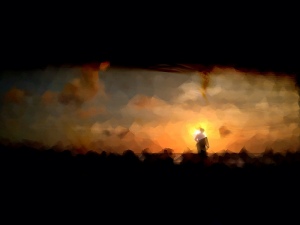