In July St. George’s welcomed 33 children to Kid’s Camp (also known as Vacation Bible School). The theme was ‘Shake It Up Cafe,’ God’s recipe for us. The kids had a great time and I would like to share some stories from this year’s Kid Camp. There were 24 helpers acting in various capacities ( group leaders, snack leaders, activity center leaders, set preparers, snack providers, administrative) and their stories are also part of the Kid’s Camp stories.

Before Kid’s Camp even started, I had a call from a Mom whose kids attended 2 years ago at St. George’s, and the family had since moved. Her kids had attended a Vacation Bible School in their new community last year but wanted to come back to St. George’s Kid’s Camp because they had had so much fun.

There were several Dad’s and Mom’s who were leaders this year from the 11:15 service and Messy Church. The leaders were fantastic with the kids, full of energy and ideas to make it a fun time. One of the Dad’s, Eamonn Dunn,  acted out one of the Bible learning segments and the kids were absolutely mesmerized. Actually, the adults were too.

Two of our teen leaders, Paige and Claire, also acted out the Bible segments each and did a great job. I don’t remember having that much poise and presence at their age. St. George’s is blessed indeed to have this talent and dedication from the upcoming generation.

Speaking of talent and dedication, Madeleine Lake was the music leader again this year. She is organized and yet able to be flexible with the kids. The kids respond so well to her leadership. She is another remarkable young person at St. George’s.

For the first time in our 3 year history of Kid’s Camp, I received thank you notes from some of the kids on the last day. One grandma had her granddaughter come to visit and registered her for Kid’s Camp. The child is shy and did not know anyone and Grandma was worried. She picked her up at the end of the first day and her granddaughter chatted all the way home about the things that they had done. The next day, the car had hardly stopped before she was out the door and gone. Every night she phoned her Mom to tell her all the days doings. It was exciting for the Kid’s Camp team to hear what an impact they were having.

A representative from the Gideon’s came again this year and presented Bibles to the kids. They were fascinated to hear his story about how receiving a Bible as a young soldier in Africa had made such an impact on his life. Each child was excited to receive a Bible. One Mom reported that her child took her Bible to bed and asked Mom to read her a story from her new book. 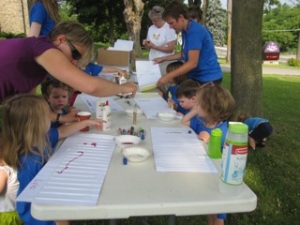 Dora Delaat was our science leader. The kids made Matzo bread during the Bible story time and at the science part they made butter from scratch. Both were a big hit. They also made ice cream which was also pretty popular. Dora has an engaging manner and made their time at that activity lots of fun.

One of the young group leaders was the ‘ photo journalist’ for the camp and there are lots and lots of fantastic photos. Geoff Delaat prepared a Kid’s Camp video with the Shake It Up Cafe music which the kids had fun watching on the last day. St. George’s has a copy to remind us of the fun that we had at 2011’s Kid’s Camp.

At the team meeting held after the kids had left on the last day, the enthusiasm of the group was great to see. Last year’s suggestions from Kid’s Camp had been successfully implemented and we strive to make every year better and better. Everyone expressed an interest in coming back for 2012’s Kid’s Camp, with some saying, “next year I would like to try being the……..”.

The kids had a chance to learn about God’s faithfulness to God’s people and about God in their lives, all the while having a great time. God has indeed blessed these young lives and all who were part of making Kid’s Camp happen. St. George’s is both blessed and a blessing.

P.S. We had so much fun we are planning some Day Programs for the up coming school PD Days. Download the form here for signing up!

Submited by The Rev’d Nancy Rowe